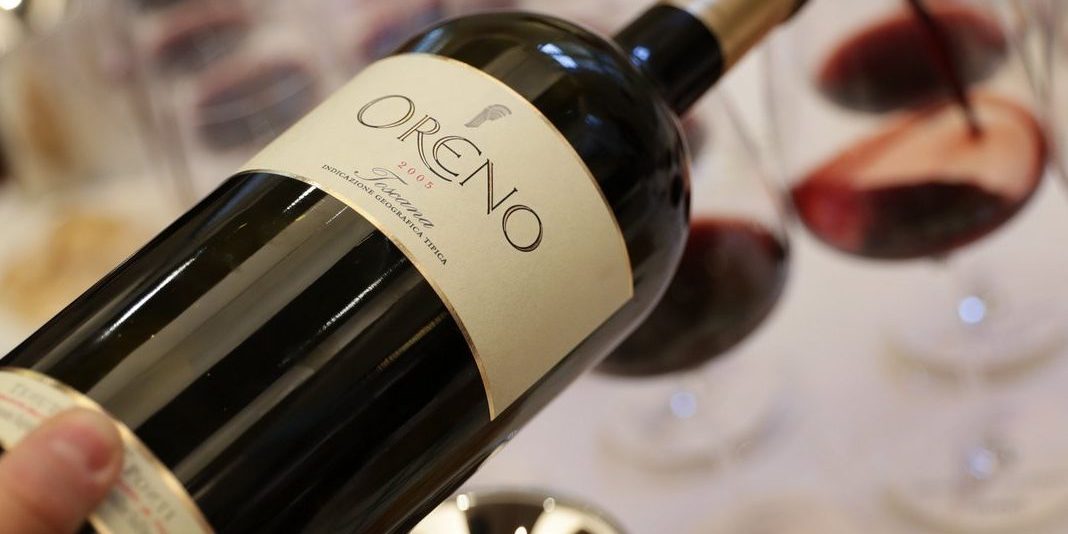 Tuscan vineyards have always be devoted to the planting of red grapes, acknowledged worldwide. Most of them are from pure Sangiovese, less or more. You are spoiled for choosing among Brunello di Montalcino, Chianti Classico and Chianti, Nobile di Montepulciano, Morellino di Scansano and many others. More there are many big reds from Bolgheri.

Today, I would like to introduce Oreno by Tenuta Sette Ponti from a different corner of Tuscany: Castiglion Fibocchi (Arezzo province) in Valdarno di Sopra. Oreno’s first year of production was 1999, the latest 2019, released on the market. While at the beginning this wine was a blend of Sangiovese and international varietals, in the years it has turned to be a Supertuscan of sole international grapes, thus excluding Sangiovese since 2008 crop. This was the brave choice of Antonio Moretti Cuseri, well known in the fashion business but a genuine winelover.

After 20 years, Oreno is conceived to be the perfect wine, or at least the one closest to perfection.

In a flight of 20 years, here are the most impressive vintages I had.

Oreno Toscana IGT 2005
40% Merlot, 40% Cabernet Sauvignon, 20% Sangiovese
The grapes are different in order to look for a major elegance. Less Sangiovese and more Merlot and Cabernet for an elegant bouquet, still floral with some jammy red fruits note. It tastes young and still needs to age. It tastes similar to Medoc wines, in spite of predominant tannins, this wine is fine, tasty, savoury (first time!) long lasting on mouth. Great wine. This wine was still Sangiovese blend but, to me, it was the best of the 20 wines.
My rating: 95/100 – Price USD 98; Euros 85

Winemaking technical notes: temperature controlled fermentation and maceration for 25 days. Aged partially in barriques and partially in big casks for 18 months and then aged 12 months in bottle. Actually Oreno is a blend of Merlot 50%, Cabernet Sauvignon 40% and Petit Verdot 10%.